Women in the Alternative Finance Industry, what is the situation?

There are numerous stereotypes and clichés that accompany the notion that women in finance, as a demographic, are not the risk-taking, ruthless, decision-makers that men are sometimes portrayed to be. Some of these ideas can simply be dismissed as lazy sexism and out-dated banalities repeated too often in what has traditionally been a male-dominated sector.

However, there is substantial scientific data which cannot be ignored, supporting the very notions that do highlight certain differences between men and women within the Alternative Finance sector.

Within the social dynamics of the 21st century, where equality between the sexes in Western Civilisation is maybe the closest it has possibly ever been, why are there demonstrable differences between male and female investors? Will the trends that emphasise these differences disappear over time as we continue to break down the gender barriers and strive for parity, or is it simply a higher level of testosterone (it is present in both male and females) that makes men supposedly more willing to take risks?

Is Alternative Finance a male-dominated sector?

A study conducted by the British Private Equity and Venture Capital Association (BVCA), found that women represented only 13% of Venture Capitalists at the end of 2017, and were twice as likely as men to leave the industry before attaining senior level positions. Venture Capitalists are people who, in exchange for an equity stake, invest capital specifically to businesses that exhibit a potential for very large growth. They’re the people with substantial amounts of money who help small companies become large ones.

Taking into consideration that equity stakes could be considered riskier than other types of investments, this shows that just two years ago, 87% of these risk-takers in the UK were male.

In essence, this could be deemed bad for business. Considering that 50% of the Earth’s population is female, half of the human population is not only a lucrative market to which you can sell, but also a substantial pool in which to invest. Diversity amongst investors is not just a box-ticking exercise, it’s proven to be good for business.

Curiously, the Canaccord Genuity Wealth Management Research Data from June 2019 shows that women are most confident when investing in property, noticeably Property Crowdfunding.

As Property Crowdfunding is a mode of Alternative Finance which can help to democratise lending and borrowing to allow both men and women (and smaller businesses) to access potential investors much more easily, women investors and women borrowers can therefore participate more fully.

What does the data say?

The dynamics of how women in Property Crowdfunding invest their capital makes for interesting reading. A study by Alsos et al (2006) found that in general, when investing, the genders tend to stick together. Female entrepreneurs trying to get their projects funded tended to attract female investors. Over 55% of the funds that female investors invested were into female-run projects and applied for by female entrepreneurs. Only 22% of male investor funds went to female-led projects.

Statistics like this could well be focused on the differences in interests that women and men are thought to have. Looking at the Crowdfunding Sector as a whole, and not just Property Crowdfunding, women dominate funding projects relating to dance, gastronomy, theatre, music and ethically progressive environmental projects. Men are more likely to fund projects relating to product design, progressive technologies or games.

Although often fed a modern narrative that specifically wants to highlight the lack of differences between men and women, Anja Peter, of Bank Coop in Switzerland concurred on the above findings, stating;

"Naturally, there are differences between men and women, biologically and socially, and this is reflected in investment behaviour."

Can we ignore the stereotypes about female investors?

Another common hypothesis is that women, for whatever reason, simply do not invest as much as men, and are more likely to prioritise saving money over speculating it.

Canaccord Genuity Wealth Management Research from June 2019 shows that 35% of High Net Worth women (individuals with £750,000 or more in investable assets) don’t have an investment portfolio, compared to 17% of High Net Worth men, and that of these High Net worth women, an overwhelming majority of them do indeed prioritise saving money along with pension funds.

The research goes on to say:

"Clearly our findings are a concern as, time and again, studies have shown that investing in the markets provides the best return of any asset class, so women are missing out. Of course, investing involves a level of risk, but inflation means cash savings are eroded over time, particularly in an era of ultra-low interest rates, whereas investments are generally designed to grow."

The irony of this is that women seem to be better at investing than men when they do invest. Warwick Business School revealed in 2018 that women outperformed men by an average of 1.8% over a three-year period, as the investments they choose are less speculative and in general, they have a more long-term perspective. The conclusion drawn was;

"Men are just a little more likely to be drawn to more speculative stocks whereas women are more likely to focus on shares that already have a good track record. Women also take a more long-term perspective, trading less frequently. This possibly means that women are investing more to support their financial goals, whereas men are attracted to what they see as the thrill of investing."

These findings were mirrored internationally in studies by the German Comdirect Bank. While women were thought to have less confidence in their financial knowledge than men, this was not matched by poorer investment choices. The study found that around 60% of men rated their financial understanding as "very good", but only 43% of women said the same.

Does it all boil down to male bravado?

Furthermore, a large sample of almost half a million private portfolios demonstrated that in 2008, the year of the Financial Crisis, women did 4-6% better than men in investments.

Because of this data, the year after the crash spawned the interesting hypothesis of "The Lehman Sisters". If there had been more senior women in the banking industry, would the credit crunch have happened?

An article in Financial Times from 2018 very thought-provokingly puts forward the idea that:

"In 2007 and 2008, a finance industry run mostly by men, facilitated by a political system run mostly by men, regulated mostly by men, brought the global financial system to its knees. The credit crunch is estimated to have destroyed several trillion dollars in economic output and to have cost possibly hundreds of billions of dollars in taxpayers’ money. We then spent the next decade discussing whether having women in top management teams improves financial performance. One wonders what would actually have to happen to dislodge the assumption that, while it can be taken for granted that men deserve to hold the reins of power, women have to prove it."

More cautious, but with reasons to be so

After looking at all the data this article sets out to present, simply by setting more realistic investment goals, curtailing expectations of high returns, and focusing more on saving money rather than investing it, could indicate that women are indeed more cautious than their male counterparts.

However, the German Institute for Economic Research (DIW) still doesn’t believe this data confirms an inherent risk aversion on the part of women. An analysis conducted in 2018 found that women would take more risks simply if they had more money. After studying about 8000 investment portfolios between the two sexes, research showed that women generally had about half as much capital to invest as men, which inevitably compelled them to be more cautious. This may be the real reason for the apparent risk aversion that is often stated to exist.

Were women given the same access to capital as men before investing, would the natural prudence that females seem to show, coupled with this cumulative data suggesting women make better investment choices, mean that Alternative Finance lies in the hands of women specifically? This of course, is hypothetical, speculative, and swings the pendulum of sexism we set out to avoid, radically the other way.

What does the CrowdLords data say? 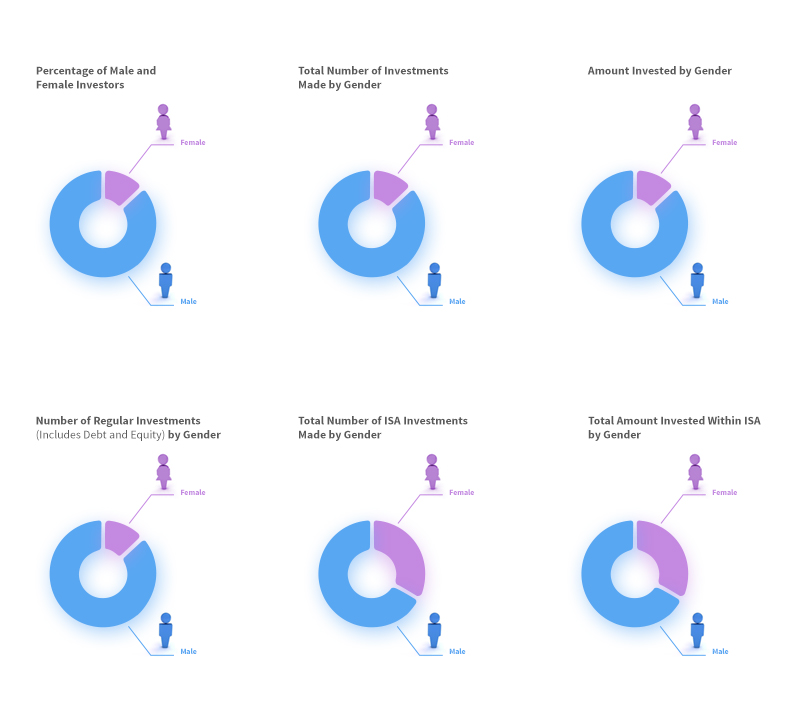 Whether we focus on the similarities between men and women that bring them together, or whether we celebrate their evident differences, one thing is clear: it is almost exactly one century since women first started breaking down social barriers to strive for equality, and though many fences have fallen, even if we focus solely on Alternative Finance, Property Crowdfunding, or investing capital, it would be naïve to think we’d arrived at the point of complete social parity.

Clichés and mentalities remain entrenched, the established status quo within businesses can seem overwhelmingly male, and there is a growing male preoccupation that the pendulum is starting to swing too far to favour women under "positive discrimination". But is this really a modern phenomenon?

One hundred and fifty years ago this year, in 1869, the male inhabitants of one Wyoming town were reported to have celebrated raucously when women’s suffrage was granted, and they were given the right to vote. At a celebratory dinner, one gentleman toasted the ladies present, stating:

"Lovely ladies, once our superiors, now our equals."